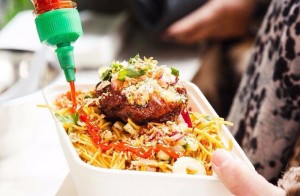 The Street food revolution is in full swing and we think it's great. Here's why:

Let's get something straight: We LOVE food. We're what you might call 'Foodies' (fellow foodies know exactly what a foodie is). We talk about food all day long with people who work with food or who want to work with food, and that's because we love it - if we didn't it would drive us mad! The Street Food revolution has brought fantastic artisan food to the masses and we think that that's awesome. Any fellow foodie will agree.

2. It Brings People Together

There is a sense of belonging at Street Food markets that's different to when dining in a restaurant, because in essence you are actually sharing a meal with loads of other people, most of whom you don't know or have never spoken to and probably never will. And it feels good.

As the economy has struggled and businesses trimmed and tightened their belts, which other industry has grown and provided jobs like this? Not only that, but it has encouraged Entrepreneurship - developing skills and attributes that few paid positions ever could. With such low start-up costs, Street Food has proven an excellent way for people of all social and economic backgrounds to start their own enterprise - and the industry is richer for it!

There are Street Food markets are appearing in areas that many people would never have dreamed going to a few years ago, take for example Street Feast in Dalston, East London. This market trades out of a burnt down warehouse that has been abandoned, and yet people travel from all over London to go there. Just consider that for a moment - people traveling to spend money in a run-down part of London in a run-down building. Millions of Euros of EU money spent on regeneration projects would struggle to have the same impact, and yet this is free.

The development and growth of Street Food in the UK has been nothing short of remarkable. It has grown from a handful of itinerant traders plying their trade in car parks and under used spaces around the capital, to the insatiable growth of specialist Street Food markets and ‘off-grid’ style events.

There are new markets and Street Food collectives starting up all over the country, from London, Birmingham and Manchester to Bristol, Leeds and Edinburgh.  Few other industries can match that, plus it's not going away. Hooray for that.