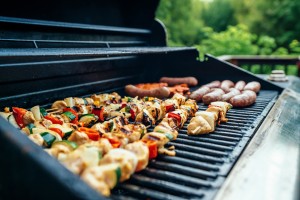 Of course, we’re all hoping for another heatwave of a summer in 2019 and for a repeat of 2018’s magnificent weather that pushed up the value of the UK barbecue market to a staggering £1.6 billion. National BBQ Week will return for a 23rd time this year to once again encourage the nation to go for the grill and fully embrace the barbecue culture.

We know that we cannot always guarantee the UK weather but what better time for Cinders Barbecues to celebrate this increasingly popular form of catering across all manner of events. From an intimate at-home family celebration, to locally-organised events in a pub, club or leisure venue, or even a wedding, find out a more about what we Brits love to do with a BBQ and how we do it differently to other countries too.

What do we eat?

When it comes to what we cook on our barbecues, the UK’s favourite is burgers (81%), with sausages coming in just behind (80%).

The most popular food to accompany a BBQ in the UK is salad.

When do we eat it?

The UK comes out bottom in the league of barbecue frequency. On average, UK households barbecue just 10 times a year, with 14% of us only doing so once or twice a year. The biggest barbecue fans are the Germans, who barbecue an average of 19 times a year! France and Poland are next up at 17 times a year respectively, and in Italy they fire up the barbie just 13 times a year.

Do we put our money where our mouth is?

When it comes to buying equipment, 18% of barbecue purchases in the UK survey take place online, while purchases from a DIY store are most popular (39%). Other places to buy the BBQ are the supermarkets and department stores (15% each).

The Brits and the Germans are the most cautious buyers when it comes to settling on a barbecue, with 31% and 32% respectively checking the expert reviews on offer before making a purchase. In Poland, perhaps due to the lower average price paid for a barbecue, only 14% checked reviews before buying.

In the UK, Germany, France and Poland, Saturday is by far the most popular day to barbecue. Italy is the exception to this rule, where 42% of people barbecue on a Sunday.

Whatever your preferred place or time, Cinders wishes you a great National BBQ Week.