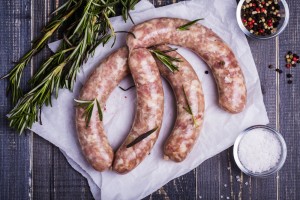 The traditions of taking the ground meats from a range of animals and encasing them in the intestines have been around for many hundreds of years. Sausages are one of the earliest forms of prepared foods known to man. These days they form the backbone of any popular barbecue and are indulged up and down the country. Throughout the world you’ll find diverse recipes for sausages in every culture, from Linguica in Brazil to the Bratwurst in Germany. Closer to home you’ll also find sausages as popular as they are diverse. Here are some of the favourite national incarnations of the delicious sausage.

One of the most famous of all the rural sausages is the Cumberland. Most people recognise the Cumberland immediately with its long distinctive coiled shape and its strong taste. The meat is named after the Cumberland pig which was reared in the region of Cumberland which was formerly part of Cumbria. The concoction is usually fused with a variety of spices which were brought into Cumbria from the ports of Whitehaven. Historically the Cumberland sausage has been eaten by Cumbrians for almost 500 years. These days a Cumberland sausage makes a great accompaniment for any barbecue.

Pork has traditionally had a friend in the apple, and so the pork and apple sausage shouldn’t come as any surprise. Indeed, apple sauce as many of you know is often a staple of any dinner containing roast pork. Traditionally you will find that most pork and apple sausages come from the west country, in particular Gloucester, where apple growing is highly popular. The combination of apples with pork sausages has been a benefit for barbecuers all over the country as a result for many years.

The pork and tomato sausage is thought to originate from Yorkshire, when in days gone by butchers would take leftover pork and mix it with plum tomatoes to make something delicious. The tomato sausage is often a great choice for kids as the red colour can prove more attractive and it’s typically used as a treat with a good old fried breakfast. We suggest giving it a try on the barbecue.

When it comes to the barbecue, cooking sausages can often cause challenges due to their high fat content. Slower cooking for longer may be preferable to avoid splitting the casing of the sausage. Always ensure that meats are cooked thoroughly before serving on a Cinders Barbecue.

CINDERS TIP: When catering for large numbers place sausages in a big pan of cold water before bringing almost to the boil. Set aside to cool and chill, ready to brown to perfection on the barbecue.