The Rise of the Brazilian Barbecues 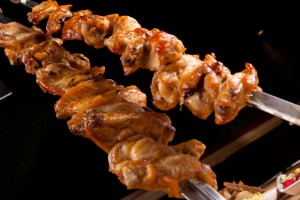 A decade ago, people outside of large cities may never have had the opportunity to try Brazilian cuisine, but the popularity of Brazilian restaurants in the UK continues to increase year upon year. The churrasco style has more in common with the barbecue traditions of the Southern states of America than the simplicity of the British barbecue, favouring slow cooked marinaded meats that fall off the bone such as spare ribs and spatchcock chicken over a low heat, accompanied by spicy sauces and dips. Slow cooked steaks steeped in sweet or spicy coatings and kebab style skewered beef, pork or prawns are also cornerstones of this type of cuisine. Chimmichurri sauce, made with peppers, chopped parsley, garlic and olive oil is a popular accompaniment.

So, for the uninitiated, what do the common terms mean?

Churrasco – the Brazilian word for meat cooked on a churrasqueira, a Brazilian barbecue grill. Meanwhile a churrascaria is a restaurant in which churrasco is served.

Rodizio – in a restaurant, rodizio, also known as espeto corrido refers to the tradition of the waiter walking around the tables with skewers of meat and slicing them directly onto the plate.

So, is it possible to successfully recreate a Brazilian style barbecue outdoors in the UK? Weather permitting, yes it is, and the colourful, flavour-filled dishes of this cuisine are very deserving of their incredible popularity.

To make a Brazilian barbecue that is authentic and show-stopping, spatchcock chickens are easy to prepare yet showcase the style and flavours of one of Brazil’s favourite and most convenient methods of cooking poultry outdoors. Depending on how long you intend to cook each course, either a whole chicken or a smaller poussin can be quickly spatchcocked by cutting out the entire backbone using a very sharp filleting knife, and then using a rolling pin to flatten the rest of the chicken on a hard surface. This also makes it easier to get the meat to absorb a marinade beforehand. Use metal skewers on both sides of the chicken to make it easy to manoeuvre, and coat the meat in a sweet honey glaze with chilli and paprika, garlic and a little lime juice or honey with Dijon mustard mixed with sherry or cider vinegar for an exotic kick. Cook the chicken on a low to medium, steady heat on a strong outdoor barbecue built for a catering event such as the Cinders Slimfold Caterer Grill.

Meanwhile, if you are catering for vegetarians, halloumi coated in fresh lime juice, honey, smoked paprika and cinnamon and grilled on bamboo skewers makes a perfect alternative to meat. Having made Brazilian style halloumi kebabs cooked on a separate tray for vegetarians, you could make the meat lovers happy too by creating a similar version with beef rump steak, a staple of churrasco. Cut the meat into 2 inch rough cubes brushed with olive oil, black pepper and sea salt and cook on a steady low heat for melt in the mouth, smoky flavours.

There are a number of authentic accompaniments you can serve with churrasco that closely mirror the traditions of the soul food of the Southern states of America, as well as Mexican favourites. From staples such as mashed potatoes, fried eggs and salads, and the more traditionally Latin soured cream, salsa and rice with spiced vegetables, Brazilian food is versatile and can be married with a number of other cuisines. You can add authenticity to your creations by including roast red peppers, plentiful jalapenos, garlic and finely chopped coriander for a successful, flavour-filled fusion. Enjoy – or as they say in Brazil, Bom Proveito!