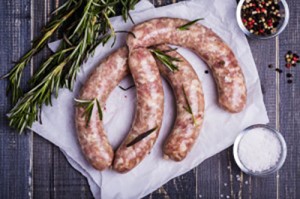 UK Sausage Week is an annual event held in the autumn of every year but unfortunately, as a result of the ongoing impact of COVID-19, the 2020 event has been cancelled.

There is no doubt that this is a shame, especially for those who were hoping to win an accolade or two this year but here at Cinders Barbecues, we don’t think the occasion should pass by unnoticed.

There are numerous different types of sausages from traditional and innovative that have won big at UK Sausage Week over the years. To read more about winners from past years, visit the UK Sausage Week site here.

The UK sausage market has had what you might call a ‘boom’ in recent years after what you might call a bit of a slump in the mid-2010s. Going back to 2008, the sales value of sausages and similar products of meat or meat offal in the UK, was worth approximately £838m according to statista.com.

Through the late noughties and into the 2010s, there were peaks and troughs in the figures before a 3-year dip from 2013 to 2015 with the lowest figure in almost a decade coming for the industry in 2015 at £761m.

In 2016 the figure was the highest it had been in almost a decade at £900m. Two years later in 2018 we saw the highest figure in a decade at £916m before a drop again last year. What the figure will look like this year, who knows? However, according to frozenfoodsbiz.com, sales of the sausage (and sausage rolls) have been sizzling this year. So, it could be a record-breaking year for the industry.

If that is the case, it makes it more of a shame that this year’s UK Sausage Week has been cancelled but that doesn’t mean that it should just pass us all by.

As mentioned, we think it would be a shame to let UK Sausage Week pass us by so we would encourage you all to use the time creatively at home and celebrate your favourite bangers in your own way.

Whether that’s a ‘household’ barbecue in the back garden, more than likely wrapped up to keep warm or even under a brolly to stay dry, a nice home cooked meal of bangers and mash or just keeping it simple with a British staple, a sausage sandwich. Whatever you decide on, enjoy it and make sure it’s done your way.