What’s in the Name? The Importance of the British Pub Name 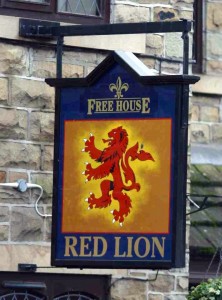 There are many quirks to living on our small but delightful island. Afternoon tea and the Yorkshire pudding are just some of the delights that may come to mind when we think of typically British things. Rooted deep into our culture is also the Great British pub and everything it means to our country.

It’s sad that so many pubs have been closing over the last few years, and perhaps the traditions of pub culture are now different to what they once where but the importance of this bastion of British society will never be fully extinguished. One of the quirkiest aspects of the Great British Pub is the name. Why is it that we come up with such weird and wonderful labels for our drinking establishments?

Why are names so important?

It’s almost like pub names have their own formula. Start with ‘The’, insert quirky adjective such as Fat, Old or Bewildered and then pick animal such as Goose or Goat. It might also be about picking the name of royalty as well, but you get the gist.

The fact is though that for many pubs across the country the name actually has some significance to local history and might actually tell a story. Take the name “The Bush” for example. Historically the Romans brought pubs to the UK and would hang evergreen vines outside to signify the establishments’ nature, and so to this day the name lives on. Many pubs with the name ‘Cock’ in the title were probably once popular venues for the local cock fighting community.

Royalty also plays an important role in the naming of pubs and perhaps one of the most influential monarchs was Henry the VIII. Names like the Cat and Fiddle, the Queens Head, the Greyhound and the Dog and Duck can all be linked back to his love of sport and, well, wives.

The Most Popular Names

Red Lion – There are a number of stories about the origins of the name ‘Red Lion’ with some claiming it comes from royal linkages to John O’Gaunt and others suggesting it relates to a common feature on many family coats of arms.

Royal Oak – The name Royal Oak goes all the way back to King Charles II who famously hid in the cavity of an oak tree at Boscobel House in 1651.

The Green Man – Many people across Britain often think that the Green Man might have some relationship to Robin Hood. There are others that suggest the symbolic nature of the Green Man relates to an old figure in folklore which represents fertility.

What Should Your Pub Name be?

Well, we aren’t the specialists but we don’t think you can go wrong on our earlier theory of picking an acutely used adjective and then going with the name of an animal, The Naughty Goose, The Old Horse, the Fearless Tiger; the list goes on.

From the 24th of July til the 6th of August its British Pub Fortnight so to all the publicans out there, we salute you!!!