The History of the Burger 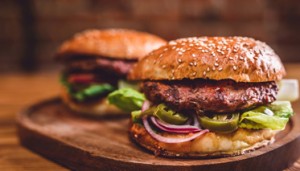 The burger is arguably one of the most popular dietary staples of the last 70 years and is synonymous with the all- American cuisine most of the world is now familiar with. But where did the burger come from, and why is it so popular? With so many different varieties available now for both meat eaters and vegetarians, burgers are one of the best choices for cooking fast for a high volume of people outdoors. A Slimfold Grill Barbecue from Cinders Barbecue is built for these types of events and can easily cook in excess of 1000 burgers a day – so how can you add a little variety to appeal to as many people as possible? Read on…

So, did burgers really come from Hamburg?

Much like the barbecue, the origins of the burger have been hotly disputed for many years. The popular story has always been that the hamburger was named after Hamburg, the German city in which it was invented. There is some truth in this, inasmuch as the first seasoned beef patty did come from Hamburg during the 19th century, a region which was at the time famed for the quality of its beef. In fact Hamburg beef was very expensive outside Hamburg itself, giving rise to cheaper imitations of what we know as the original hamburger, much like the equally popular fizzy wines created outside the Champagne region of France. However, the concept of putting a burger in a bun to make the burger we know and love today came a little later.

When German settlers began to establish their own restaurants on American soil in the early to mid-1800s, the US version of what was then known as the Hamburg steak began to take off. From New York to Tennessee, demand for the then very expensive Hamburg steak began to grow. The earliest recipes for the hamburger were usually very simple, with high quality, tenderised and chopped steak mixed folded over finely chopped fried onion, butter and salt and pepper, then pounded to keep the ingredients together. The Hamburg steak was then seasoned with salt and pepper and flash fried on both sides in butter.

The rise of the burger as we know it…

The evolution of the burger from a German to an American dish began during the industrial revolution of the 1800s, when the idea of ‘fast food’ was beginning to take hold. Factory workers from all over the world came to make their way in the US, and tough night shifts were an opportunity for enterprising caterers to provide vans outside the buildings with hot food and drink to keep the workers going. When gas powered grills had been integrated into the food vans, the Hamburg steak appeared once again, but the difficulty of eating it quickly standing up during a break gave rise to the innovation of placing the meat between two pieces of bread. No-one will ever know for certain which clever entrepreneur first served the hamburger sandwich, but it rapidly became one of America’s national dishes overnight.

The first dedicated hamburger establishment is thought to have been the White Castle in Wichita Kansas in 1921. Many of the fast food practises we now see everywhere appear to have originated here, with an emphasis on good hygiene and transparency in its operations, with an open kitchen behind the counter where customers could watch the food being prepared. From here, many of the classics such as sodas and skinny fries we associate with the 1950s roadside diner became hugely popular.

During WW2, US soldiers brought hamburgers to Europe, where they quickly became just as popular and sought after as they were in America. In the 1940s, the McDonald brothers opened their first drive-in in California, giving birth to the billion dollar empire known all over the world today.

A burger for every culture and preference

From those humble beginnings, the original concept of the classic burger with salad, sauce and a slice of cheese inside a toasted sesame bun has remained incredibly faithful to the original to the present day. The only difference is that now, there is a burger for every dietary requirement, preference and religious custom in the world. From burgers made from chicken, turkey and fish to completely vegan alternatives such as the Japanese rice burger, the Mexican bean burger, the incredibly convincing soya, quinoa or mushroom based meat substitute burger to the Indian McAloo Tikki burger made from vegetables, spices and hot sauces, the choices are more or less endless. Could you create the next craze in burgers? The burger is definitely here to stay, and the only limit is the imagination of the chef!