Ideas for a Vegan BBQ 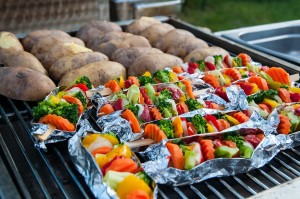 Just recently, it has been a rather popular trend to make vegans the butt of jokes. However, with the editor of Waitrose Food magazine recently quitting his job after mocking vegans, and with the number of UK vegans on the up, it’s clear that pub landlords, restaurateurs, and hoteliers across the country should be making provision for this rising number of discerning consumers.

In April last year, Compare The Market announced the results of their survey that revealed that the number of UK vegans is soaring with some seven per cent of British people having gone plant-based. A huge number of British people are turning their back on animal products. Amongst the UK’s 3.5 million vegans are ranked a number of famous celebrities such as singer Ellie Goulding, music legend Paul McCartney and sporting giant David Haye, who have all used their public platform to speak out in support of the cruelty-free, sustainable lifestyle.

So, what can this ‘explosion’ of veganism be put down to? According to Google trends, searches for ‘veganism’ have been rising steadily, and following a similar pattern to Instagram. “The vegan community are incredibly active online,” explains Beth Trundle, head of food at marketing agency Social Chain. “This is likely because their dietary choices are driven by their fundamental beliefs”, she explains, “which can boost their social media activity as they are keen to share their passion for veganism with the world.” Gresham College professor Carolyn Roberts suggests that environmental concerns are largely responsible for edging people towards a vegan diet, as people strive to reduce their carbon footprint.

Whatever spurs on people’s individual dietary and moral choices, it seems foolish, with more and more young consumers eating plant-based, for anyone with a food offering to ignore this growing customer need.

According to the Vegan Society, demand is outstripping supply and this is an untapped market that could offer huge opportunities for restaurant owners, investors and food developers. Their Vegan on the Go campaign aims to raise attention for the growing demand for vegan options and to highlight to businesses that veganism is a market trend that is here to stay…

So, why not throw a vegan barbecue at your event, making sure that it is the delicious smell of plant-based foods alone that are filling the air!

Here’s how to do vegan on the BBQ

Grilled Polenta Burger: Boil up some coarse cornmeal with vegetable stock until thick but springy, following packet instructions. Fry up a diced onion, a few finely chopped mushrooms and a handful of cooked beans (black beans work great) until the onions are golden brown. Slightly mash the beans when soft. Add to the cooked polenta, along with a teaspoon each of thyme, marjoram and paprika. Take off the heat, and when cool, shape into patties ready for grilling. Serve in a bun with avocado slices, chopped olives and jalapenos.

Baked Sweet Potato: Sprinkle the sweet potatoes with olive oil and salt and wrap them carefully in tinfoil, making sure to leave some excess at the top (to grab onto later). Place directly onto the hot barbecue, making sure to space them out to allow for even cooking. Cook for around 15 to 20 minutes and top with soya yoghurt and chives.

Why not spice things up with some grilled vegan chicken with vegan honey, lime and chipotle sauce or some spicy buffalo cauliflower ‘wings’. Don’t forget to accompany this with a good range of vegan sauces and relishes and serve with some delicious vegan wine or refreshing vegan beer.

Sit back and be prepared for pictures of your delicious vegan dishes to adorn the pages of Instagram and, if you’re looking for some new barbecue equipment to appear in the pictures when you ‘go viral’, check out our Cinders range.